In Georgia, Preparing for an Abu Dhabi Grand Prix of Miniature Proportions

[Note: Team Shift finished fourth in the world in competition in Abu Dhabi in Noveber. Fred…

[Note: Team Shift finished fourth in the world in competition in Abu Dhabi in Noveber. Fred Stillwell, KSU '91, the mentor of Team Shift, is profiled in the current edition of Kennesaw State University Magazine. Click thelink below to read his story.]

The New York Times
Automobiles section
Wheels: The Nuts and Bolts of Whatever Moves You
Posted: July 5, 2012, 11:30 am
By KRISTEN HALL-GEISLER 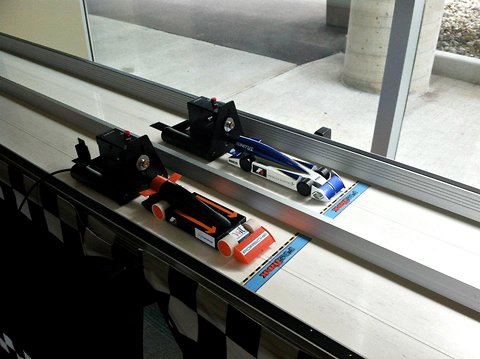 Team Shift
Balsa-wood racecars, designed and built by students participating in the F1 in Schools program.

At Michigan International Speedway in May, four high school freshmen from Marietta, Ga., finished first in F1 in Schools, an extracurricular engineering competition in which students from ages 9 to 19 design, build and race a CO2-propelled, balsa-wood model of a Formula One racecar.

It was the first time a winning team was comprised entirely of girls. And Team Shift, as Kelly Fitzgerald, Anna Awald, Claire McCoy and Sabine Saldanha are known, completed the project in a time-honored fashion: after school, in a garage.

Some schools build the engineering program into their curricula, and students receive significant support. The members of Team Shift were not among them. “We had no school help,” Ms. Fitzgerald, the team manager, said in a telephone interview. “We did all of it outside of the classroom, in our homes and in our former teacher’s garage.”

Not that they were completely alone in the endeavor. When Team Shift entered the competition in 2011, they contacted the headquarters of Porsche Cars North America, in nearby Atlanta. After the students explained the nature of the project, in which they would use 3-D modeling software to design their racer, Porsche was on board.

“It was such a natural fit for us,” Steve Janisse, a spokesman for Porsche, said. Though Porsche does not compete in Formula One, Mr. Janisse noted the marque’s decades of heritage in other race series. In 2011, Team Shift finished second in the national competition and became partners with a German team of boys for the finals in Malaysia. A German intern employed by Porsche facilitated communication among the teammates as they prepared over the summer.

When the girls entered the 2012 competition, Porsche was again a sponsor, and this time Team Shift brought home first prize with the fastest time down a 65-foot straight. They are scheduled to compete in Abu Dhabi in October for world bragging rights. 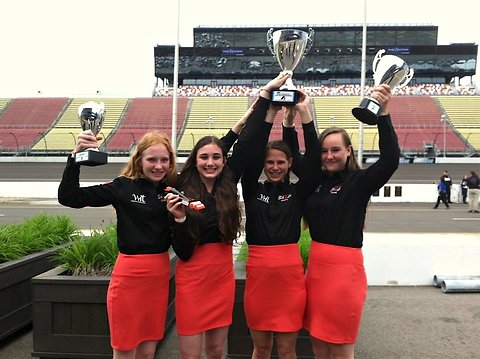 Team Shift
From left, Claire McCoy, Sabine Saldanha, Kelly Fitzgerald and Anna Awald, after their victory at Michigan International Speedway in May.

“We started with sketches and went through 3-D models like most teams,” Ms. Awald, the design engineer, said. “But I think what really set us apart was our inspiration, which was kind of different. We wanted to make sure we tracked as straight as possible, so we used an arrow to model a car.”

For the world competition in October, Team Shift is designing an entirely new car and working on peripheral materials for the entry, including a display and a portfolio. The team visited Porsche headquarters in June to learn more about aerodynamics and lightweight design, and the company that designs car-show displays for Porsche provided the students with advice on presentation. In addition to its financial sponsorship of Team Shift, Porsche has also helped with introductions between the students and the automaker’s racing partners as potential sponsors.

The members of Team Shift were not race fans before their involvement with F1 in Schools, but that has changed. The members watch every Formula One grand prix, which often means turning to the DVR, as most races occur either in Europe or Asia. They don’t, however, fret about overhearing spoilers in the hallways at school. “I haven’t met another person who follows Formula One yet,” Ms. Awald said. Any favorite race programs? “We’re big McLaren supporters.”

Not surprisingly, the students hope to stay on after the international final in October for the Abu Dhabi Grand Prix, scheduled for Nov. 4.

For the 2011 competition, 40 percent of competitors were female, according to the program. Team Shift is aware of one other all-female team, from Austria.

“Last year when we were in Malaysia, we got all of the girls that were in the competition from every team to stand up and get our picture taken on the big stage,” Ms. Fitzgerald said. “It was interesting to see all the girls up there and see that you really can do this. It was a big confidence-booster for everyone.”

Wheels: The Nuts and Bolts of Whatever Moves You